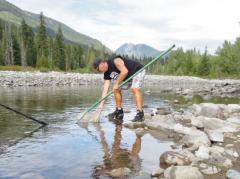 Mission Statement: To honor, protect, and restore culturally important fish populations and their habitats throughout the Zone of Influence of the Yakama Nation and to protect the rights of Yakama Nation members to utilize these resources as reserved by them in the Treaty of 1855 (12 Stat 951).

Yakama Nation Fisheries works "To honor, protect and restore Nch'i-Wa'na (the Columbia River), its tributaries and its resources for the benefit of current and future generations of the Yakama people as reserved for them in the Treaty of 1855 (12 stat. 951).